Telecoms regulator Ofcom has launched a probe into landline-only rental prices after over concerns the elderly and vulnerable are being hit hard by rising costs.

Ofcom said all major landline providers had increased line rental charges by between 28% and 41% in recent years, despite the wholesale cost of providing the service dropping by a quarter.

According to Ofcom, market leaders BT and Virgin Media had the highest line rental charges, while Sky has raised landline prices by 41% in the past six years. In response, Virgin Media said it would freeze landline charges for its elderly and disabled customers from January 2017.

Jonathan Oxley, Ofcom’s competition group director, said: “Our evidence shows that landline providers have been raising the price of line rental, even as their costs have been coming down. We’re particularly concerned for older and vulnerable customers, who rely on their landline and are less likely to change provider. So we’re reviewing this market to ensure these customers are protected and getting value for money.” 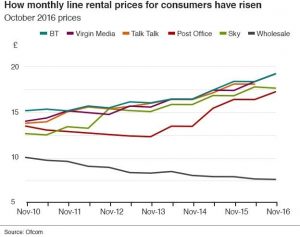 It is estimated that around 10% of households in the UK do not have broadband or television packages. This means some two million homes rely on landlines or mobiles. Around a million are completely dependent on landlines.

Having announced its review today, Ofcom expects to publish its findings early next year.